How well do we validate patient consent?

If you have been in practice for a while there will be times when you become aware that the patient may have misunderstood the risk involved regarding to a proposed treatment or lack of treatment. Both parties may have agreed but not understood fully what they agreed to. This flies in the face of the basic tenets of valid consent. NHS Choices (1) defines valid consent as:

“For consent to be valid, it must be voluntary and informed, and the person consenting must have the capacity to make the decision.”

Assuming that our patients have capacity to give consent and have not been pressured into making a choice how do we make sure they are correctly informed: i.e. the person must be given all of the information in terms of what the treatment involves, including the benefits and risks, whether there are reasonable alternative treatments and what will happen if treatment doesn’t go ahead.

I believe the most important part of being correctly informed prior to giving consent is understanding the potential future risks of accepting or rejecting a course of treatment. To answer this a focused question was developed using a PICO approach.

“What methods of risk communication are used in the shared decision making process to gain valid consent in dentistry?”

Three searches were undertaken using PubMed, Cochrane Library and Tripdatabase. Both MeSH and free text word were used: “dentistry”, “dental”, or “oral-health”, “risk communication”, “shared decision making” and “valid consent”. PubMed and the Cochrane library produced zero matches and Tripdatabase found 27 systematic reviews but none of them matched the question.

How are we performing then?

With no substantial evidence-base available a small experiment was set-up to see what six consultant grade restorative dentists did when writing out restorative treatment plans to convey the idea of clinical risk/benefit.

Eleven anonymised complex clinical cases were presented comprising of a brief dental history, presenting complaint, clinical images, radiographs, and study-casts. The clinicians were given ten minutes per case to assess the patient’s current dental health and future treatment then complete a proforma letter expressing their prognostic opinions as they would with a real patient. The clinicians were not allowed to confer during the experiment. The results were collected and tabulated below

The analysis produced a lot of descriptive terms relating to prognosis/risk and outcome which come under the title of ‘words of estimative probability’ (WEPS). Only once (1/140) was there a time frame/numerical probability given. This use of WEPS only is however not an unusual occurrence, in fact as the results both from the literature review and small experiment show it’s the accepted practice.

If we really want to give our patients information that is clear and useful we need to look outside of the medical and dental guidelines and the Global Intelligence Community has been wrestling with this for a long time(2–4). This challenge with using descriptive words only was first documented by Sherman Kent in 1964 for the CIA in an attempt to improve intelligence briefings following the Bay of Pigs disaster in 1961. He proposed that numerical odds were added to the descriptive words to add clarity between analysts and the decision makers. Even though the logic of his argument was accepted it was never adopted until quite recently following 9/11 and Middle Eastern Crisis. The concern was that the numerical probability would be taken as a fact rather than as a probability and the forecaster could be accused of being wrong if the event did-not occur. This is what Philip Tetlock in his book ‘Superforecasting’(5) calls ‘the wrong-side-of-maybe’ fallacy. So if the weather forecast says there is a 60% chance of rain and it does not rain the forecaster is judged as being wrong. Hence the preference to use words that can be interpreted elastically. In practice 90% success relates to the success rate of the clinician, for 1-in-10 of the patients the treatment has 100% failed

The question then is, can using numeric probabilities help in communicating risk to our patients? Similar to Sherman Kent I divided the commonly used WEPS and ascribed rough probabilities of success to these.

The first test was to see how patients interpreted the words without any numbers or probabilities to anchor off. We asked sixty consecutive general practice patients without asking the same patient twice what chance of success (excellent, good, fair, guarded or poor) meant. This duplicated some of the method de Bruin(6) used to answer the question ‘What is 50/50?’.. An example of the proforma given to the patient is indicated below

“Thank-you for helping in this research project on patient consent

If a health care professional said the success of your operation was ‘insert WEP’ could you please indicate on the scale below where you think the outcome would be.

The patients were asked not to over-think the question but go with their first instinct and no additional guidance was given. The result where charted below using a Box plot.

Fig.1 Patient perception of risk with words only. 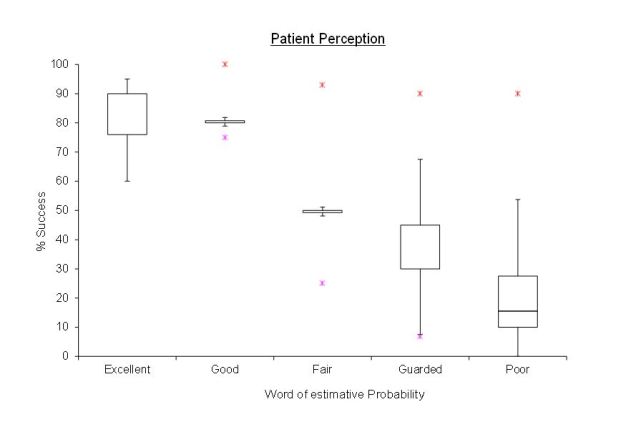 From the results on the box plots we can see on both charts a trend downwards from excellent to poor  Without the numbers there is greater optimism and overlap in interpretation and ‘guarded’ is overestimated by about 30 % with outliers from 30% to 90%. Once the numbers were included much better resolution was achieved with the median figures being closer to the expected values. One must note however that there were still huge outliers in the interpretation as marked by the red asterisk on the second chart.

To gain valid consent clinicians need to understand that what they are saying does not necessarily align clearly with what the patient is understanding and there is a general trend to over-optimism. This can lead to an exaggerated sense of disappointment should a treatment fail and a sense of frustration from the clinician who feels they explained the risks prior to treatment. To narrow this gap, it is clear that adding a time frame and chance of success helps such as the ‘10-year success is good (7/10)’. The probability could be from 1-10, 1-5 or a star ratings more commonly seen on rating websites but it is quick and helps to anchor the patient closer to the clinician interpretation of the words used. Caution should however also be exercised as even with the inclusion of description, time and probability there were still large outliers in how the patients interpreted the information. In a paper about prognostic disclosure in cancer care(7) patients wanted a frank detailed prognoses but they also they want good news and the clinician to be optimistic. Though this task may be impossible I hope with a few simple additions we can add a little bit more clarity to the task of consent.