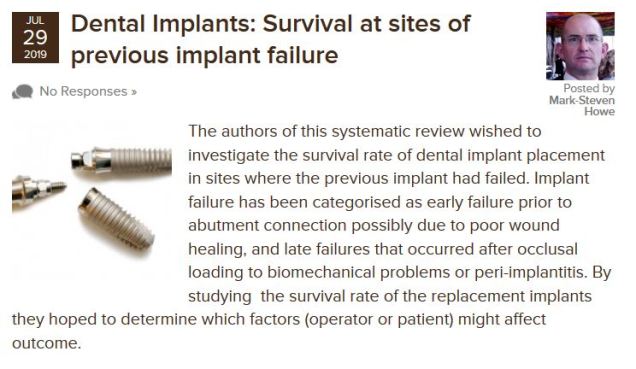 As a dental surgeon, I have spent my entire career trying to keep up-to-date with the latest evidence as surgical techniques have evolved. Over the past 10 years I have started to question the validity of some of this evidence as I was seeing more complications relating to dental implant treatment than the research would suggest. To explore this hypothetical mismatch between clinical and research outcomes I chose to undertake an updated systematic review (SR) and sensitivity meta-analysis on the ‘Long-term survival of titanium dental implants’ [1].

Observations from the research

Following completion of my SR there were four areas where the previous SRs had potentially over optimised their conclusions:

A traditional analysis produced similar 10-year survival estimates to previous systematic reviews. A more realistic sensitivity meta-analysis accounting for loss to follow-up data and the calculation of prediction intervals demonstrated a possible doubling of the risk of implant loss in the older age groups.

I just had a shortened version of my MSc dissertation published in the Journal of Dentistry, at present its only in its online version. Here’s the link:

The next few blog posts will cover: